Hypnotism, music and medicine might not seem like occupations that are naturally related to one another; it’s a rare combination, but not a unique one. Franz Anton Mesmer, the father of hypnotism, was also a doctor and musician. So, too, is Dr. Edgar Barnett. For the past 40 years, Edgar and his wife Margaret have called Kingston home – although Edgar admits that he has lived in nine different residences since relocating to the city from his native Great Britain in1966. He has also worked out of the same Princess Street office since 1969. Now at the age o 80, Edgar still works there four days a week as a hypnotherapist – that is, when he’s not writing or publishing books or holding small concerts in the comfort of his own music room.

The relative comfort and stability Edgar enjoys today is in stability Edgar enjoys today is in sharp contrast to his early years in England. The only son of a single mother, Edgar was born and raised in the midst of the Great Depression in London. Those circumstances would have been formidable enough, but that wasn’t the only challenge Edgar faced as a boy. “I was the only black kid in the neighbourhood,” he says. “I was the only black kid as school. There was a lot of racial prejudice, of course, at that time. Despite that, I got along well with my school friends, but that was the background.” 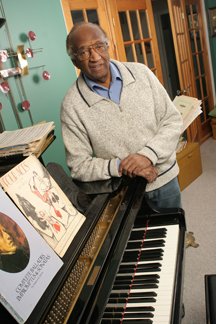 Prevailing racial attitudes, however, were not enough to keep Edgar – a good student raised in “a very religious way” by his devout mother – from experiencing some early successes. He was given one particular boost as an 11 year old elementary school student. “Even though I wastage only black kid in the school, the senior master made me Head Boy. Looking back on it, I enjoyed the status,” he admits with a chuckle.

Edgar had a front-row seat for the massive disruption cause by the Second World War, as he was forced to evacuate London during the Germans’ devastating attacks on the city during the first year of the war. While his mother remained in London, Edgar was billeted with other families in surrounding communities; in fact, Edgar says, he has maintained contacts with those families to this day.

He still attended school, and he enjoyed some victories on the sports field, setting his school’s long-jump record and servings captain of the school’s second soccer team. At the same time, Edgar was cultivating his musical talent. While in elementary school, Edgar was enrolled in a program to learn how to play the violin. Not long after, he and a classmate were offered a three year scholarship  to Trinity College in London to study the violin. “ My musical education was on its way then,” he says.

Every Saturday, he travelled to the college to play. While his love for music was growing, he admits that his proficiency in the violin wasn’t exactly progressing. When his scholarship was finished, his violin playing days were over. “I must say, I wasn’t a good violin player. I need touched the violin again after that. After all, I was the nearest one to it…why should I suffer?”

Luckily, his mother had begun cultivation Edgar’s musical talents in other areas, purchasing a piano for him when he was 12. He honed his skills by playing hymns. In fact, during the war, he travelled back to the city on weekends to spend time with his mother and to play the organ at the local Baptist church on Sundays.

The country was still caught up in war when Edgar neared graduation from high school. He wrote an exam to become a pilot, but when he advised the British Army that he had also applied to medical school, the examiners conveniently failed him on his pilots’ test – apparently, they decided that Edgar would be more valuable on the ground as a doctor that in the skies as a pilot.

Edgar was ultimately accepted to go to medical school in Newcastle and studied there for five years. But he didn’t neglect his musical studies; Edgar was able to continue to play the piano at the home where he was boarding.He joined the International Club in Newcastle and even began a music appreciation group. While participating in that group he met Margaret, his future wife. “She played the piano and we played duets together.”

In 1948 the couple decided to get married even though, Edgar admits, they had very little money with which to start a life together. He remedied that by winning £90 in a contest that was posted in the newspaper. “That’s what we got married on,” he says.

Edgar graduated from medical school only a matter of days before he got married. His first job was at a 100-bed hospital in Dorset, where was the only resident doctor. It was trial by fire. “ I had just graduated but was asked to give anaesthetics and was asked to do autopsies. They were very important experiences that no young doctor ever gets anymore.” In 1950 their first child, Carolyn, was born.

The couple eventually moved on to Birmingham, where Edgar worked on a salary as part of another doctor’s practice. In 1953 their son Nigel was born and later in 1957, when Edgar was a family practitioner in a ‘partnership’ with another doctor, their third child, Judith, was born.

At the same time, he says, one of his patients was experiencing some emotional difficulties; after studying hypnotism he decided to use the technique to treat the patient. “I gave her suggestions to make her feel better and go back in her memories,” he says. “I was fascinated by this and began using hypnosis more and more in the practice.” I fact, he used hypnosis frequently to help expectant mothers deal with pain during labour.

By the late 1950’s Edgar was becoming especially frustrated by the fact that he was being consistently turned down by the National Health Service to set up his own practice – despite the fact that other younger doctors were being awarded practices. “Each time I applied I came away with the feeling that I was never going to succeed in getting my own practice.” The real reason why he was being turned down wasn’t apparent to him until had a somewhat comic conversation with a fellow doctor on a train after one of his unsuccessful bids. “He said, ‘You won’t ever get a practice, Edgar. You’re black. I won’t ever get a practice either, I’m Irish.’”

Not long after, Edgar appealed to his latest unsuccessful bid. Eventually, he did get that practice – in Basildon New Town outside London, a new community with lots of young couples. “There was a flood of youngsters just getting married,” he says. “Before you knew it, we were getting swamped with babies.” There Edgar blames deeply involved in the community and even became president of the local community association. But after working as a general practitioner for a number of years Edgar still wasn’t satisfied. “I always felt I wasn’t using my abilities the way I wanted,” he says, adding that he became tired of the “structure” of British medicine, which put family physicians at the lowest rung of the ladder. “I felt frustrated by that I was feeling as if my talents weren’t being used.”

So,  in the mid 1960’s, Edgar began looking for opportunities elsewhere and he spied an advertisement for rotating internships in Kingston in the British Medical Journal. “We thought that would be a good place to start off.”

In the Summer of 1966 the Barnetts, including their family dog, boarded the Empress of Canada for the eight day voyage across the ocean. When they arrived in Kingston – without their belongings, thanks to a shipping mistake – the first impressions weren’t quite ideal. Even their first meal, utensil-free dining on Kentucky Fried Chicken, was a bit of a shock. In their first full day in the city they headed downtown, only to find it virtually abandoned: all the city’s shops and offices were closed on Wednesday afternoon.

Despite those early adventures, Edgar and his family quickly adjusted to and thrived in Kingston. He found his first rotating internship tone a beneficial introduction. “It was very good for me because I met everybody. I’d go from one place to another,” he says, adding that he spent time in paediatrics, psychiatry, emergency another medical department. “They didn’t treat me like an ordinary student because they knew I had lots of experience practising medicine.”

Before long Edgar decided to practise family medicine once again and he opened an office in a new building on Princess Street. He moved into it and hasn’t left since. “I was busy from the word go,” he says. “People were looking for doctors even then.”

Although the location of his practice wouldn’t change, his work would change considerably. “I built up quite a good practice and was enjoying it,” he says. “But I began to realize that I was spending more time on hypnotherapy than I did before.” He eventually splits time evenly between family medicine and hypnotherapy. Then, in the mid 1970’s he “closed the door” to all family medicine to concentrate solely on hypnotherapy.

When Edgar left Great Britain he brought his love of music with him. He remains active in Kingston’s music community and been a member of the Kingston Choral Society since the early 1970’s. He has even hosted concerts that feature expert musicians in his own music room at home; the latest to “take the stage” at the Barnetts’ was renowned concert pianist Valery Lloyd-Watts. These performances are often run-throughs leading up to bigger shows. Sometimes Edgar does more than just play host and actually provides accompaniment. “It’s not easy for me,” he admits, “I have to practise hard to do that. But I enjoy doing it.”

Kingston has clearly become a home base for Edgar and Margaret. Not only do they remain the city, all three of their children are living in Kingston as well. So it’s not a surprise to find out they have no plans to move. “We’ve been around the world and, really, it’s a great place. When you’ve been around to see other places, you come back and say ‘I’m lucky to be in a place like this.’”